Rule 40 of the Olympic Charter was introduced by the IOC to help ensure global participation at the Games and to provide very significant funding worldwide for International Sports Federations and National Olympic Committees. This in turn supports a significant portion of national athlete performance programmes, participation programmes, sporting events, and scholarships around the world, including Ireland. In short, it is a key driver for the support of sports worldwide.

On 19 February 2020, the OFI issued its own guidance on Rule 40 following consultation with the Athletes’ Commission, athlete agents and its own sponsors and partners.

This information and the guidelines are published here.

What does Rule 40 provide?

Athletes are able to generate income through personal sponsorships and appearing in advertising for those sponsors, and can continue to do so by being involved with well-planned advertising during the Olympic Games.

By accepting some limited restrictions on these activities during the Games, athletes who enjoy personal sponsorship deals are helping to secure funding to support all national Olympic teams.

In the case of OFI’s marketing programmes, by accepting some limited restrictions on their activities during the Games, athletes who enjoy personal sponsorship deals are also helping to support all participants within Team Ireland.

The Olympic Federation of Ireland is committed to an athlete first approach. In 2019 and 2020 the OFI engaged in negotiations with the Athletes’ Commission made up of current and former Irish Olympians and has also engaged with athlete agents and its own sponsors, partners and suppliers.

What is meant by Rule 40 Permissions?

The Tokyo 2020 Olympic Guidance for Team Ireland members makes it easier for athletes to engage in marketing by allowing athlete personal sponsors to obtain permissions detailed in the Team Ireland Rule 40 guidelines. This includes Generic Advertising which does not use any Olympic or Team Ireland IP and on-line thank you messages during the Games Period (13 July 2021 – 10 August 2021) that would ordinarily be restricted.

In order to apply for these permissions, athletes need to invite their personal sponsors to complete this online process and sign up to the Team Ireland Personal Sponsor Commitment.

Step 1
Athlete registers his / her personal sponsor(s) in the Team Ireland Rule 40 system.

The registration to obtain Personal Sponsor Permissions can happen at any time before 15 May 2021 and we advise all athletes and participants to register their personal sponsors and apply for permissions once they are included on the long lists submitted by their National Federations in March / April 2020, identifying them as being potential Team Ireland members for Tokyo 2020.

Personal sponsors must comply with the Personal Sponsor Commitment agreeing to specific anti-ambush terms. This is in addition to standard protections for Olympic and Paralympic IP that apply at all times. Even with this contract, at its core, Rule 40 is an IOC eligibility rule. As always, it is the shared responsibility of personal sponsors and athletes to be mindful of regulations as to not jeopardise athlete eligibility. Failure to comply may jeopardise the athlete’s Games eligibility.

In both cases, the marketing must not use Olympic IP, including Games imagery, or otherwise imply any relationship between that personal sponsor or any of its products/services and Team Ireland, an NGB or the Games. The OFI and the IOC retain the right and sole discretion to determine if a use implies any relationship.

In order to avoid any implication that a personal sponsor is a sponsor of Team Ireland or the Games, marketing that specifically promotes brands, products or services can never be combined with advertising promoting the athlete’s Games participation in any manner. For example, during the Rule 40 period, athletes cannot retweet or repost generic marketing content promoting brands, products or services. All marketing must adhere to these guidelines to comply. When in doubt, contact the OFI commercial team for review via email: admin@olympicsport.ie

This Olympic Federation of Ireland guidance applies to all marketing using Games participants during the Rule 40 period in Ireland regardless of the media platform and how its distributed. Advertising purposes include all forms of commercial promotion, including traditional advertising (e.g., print, TV, outdoor, online), direct advertising (e.g., emails, text messages, direct mail), social and digital media (e.g., posts, retweets, shares by athletes or sponsors), point of sale (e.g., on-product, on-retail premises) and public relations (e.g., press releases, personal appearances, lending or gifting of products). There is no distinction for Rule 40 between non-profit or for-profit organisations. 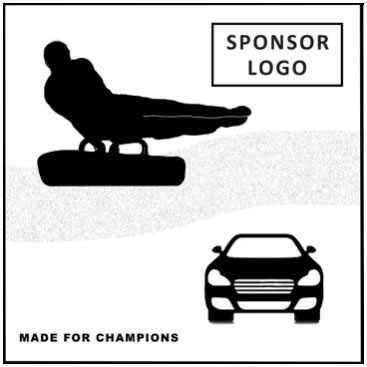 WHY:
Generic advertising specific to athlete’s relationship with sponsor.
No use of Olympic IP or protected tag-line 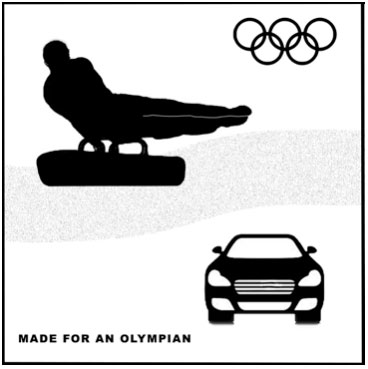 WHY:
Use of Olympic IP – Olympic Rings and designation Olympian.
Athlete Personal Sponsors are not permitted to use Olympic IP and marks 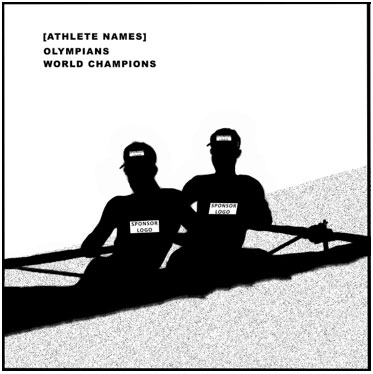 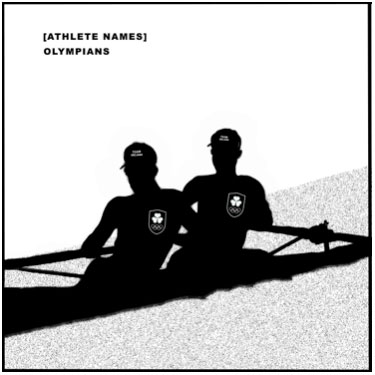 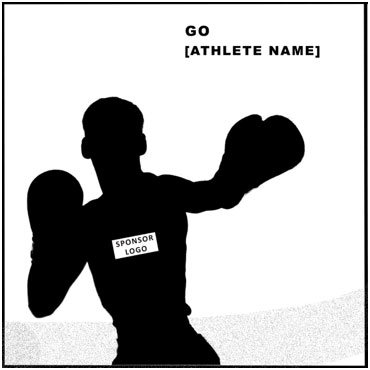 WHY:
Generic advertisement, specific to athlete’s relationship with personal sponsor. 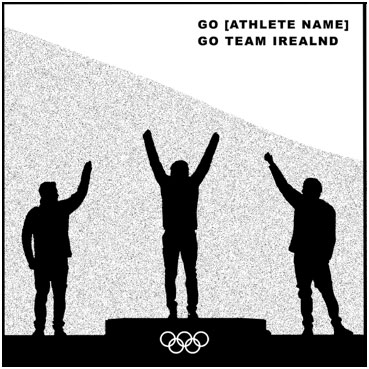 WHY:
Uses Olympic IP (Rings), makes reference to Team Ireland and image taken from within an Olympic venue.

In order to avoid confusion, athletes may not thank Olympic sponsors and personal sponsors in the same message (e.g., not ok to say “Thank You, Coca-Cola, Visa and [personal sponsor]."

Athletes should review the IOC Guidance on online messages by participants for further IOC rules on online activities.

Permitted
“Thank you @company for supporting my journey”

“Thank you @company. Your [product] is the best”

"Thank you @company. You made my Olympic dreams come true”

“Thank you @company. Your [product] helped me win today” 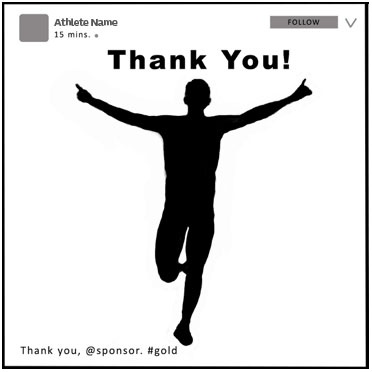 WHY:
Post uses generic image and copy.
Sponsor logo included only in conjunction with ‘thank you’ messaging.
Sponsor mentioned only once in written copy. 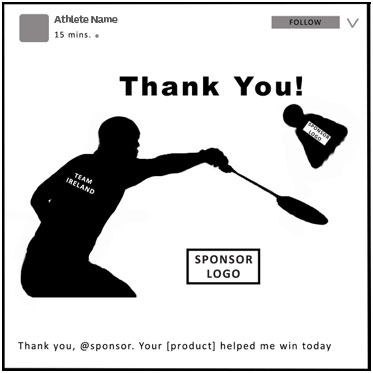 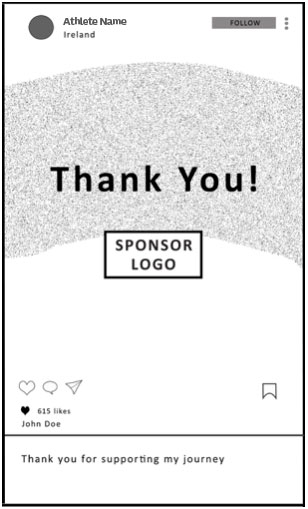 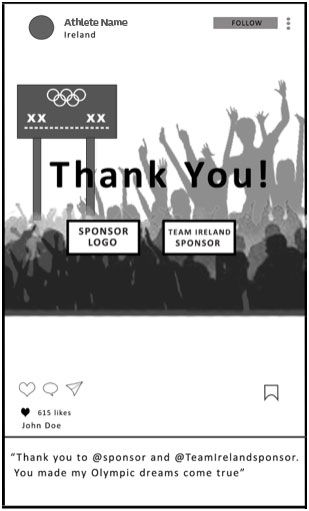 WHY:
Post uses image taken at an Olympic venue.
Sponsor mentioned with a Team Ireland sponsor.
Use of Olympic IP in reference ‘Olympic dreams come true’.

During the Rule 40 period, athlete personal sponsors who have obtained Rule 40 permission may re-circulate once (in its original form) that single thank you message on their social media platforms provided the Athlete Personal Sponsor does not:

Games participants agree not to make commercial use of images of him/herself in OFI and/or Team Ireland apparel or branded items from the Games, or with Games medals, without the OFI’s consent.

Only official Games or Team Ireland / OFI sponsors may make commercial use of Olympic IP, including but not limited to still and moving images from the Games and trademarks such as:

As a condition to receiving Rule 40 permission, personal sponsors must commit to certain restrictions for the duration of the Rule 40 period, including the terms of this guidance and that:

Additionally, Rule 40 permission does not authorise personal sponsors to act as a Games news source.

These guidelines apply only to Team Ireland athletes and campaigns targeted for use in Ireland. Team Ireland participants and their personal sponsors must also obtain IOC approval for any use of their images in advertising outside Ireland during the applicable Rule 40 period. The IOC’s guidance allows for generic advertising, based on the requirement that all non-Olympic partners notify the IOC, Tokyo 2020 and the affected NOC(s) of generic advertising plans outside of Ireland by no later than 15 May 2021, unless otherwise agreed by the IOC.

Similarly, commercial use in Ireland of a non-Team Ireland participant requires the consent of the participant’s home National Olympic Committee.

When in doubt, contact the OFI commercial team for review via email: admin@olympicsport.ie